Patchogue Theatre for the Performing Arts (PTPA) is a 501(c)(3) nonprofit arts organization that enriches, educates, and entertains a diverse audience by cultivating and showcasing a broad variety of performing artists. Patchogue Theatre serves as an innovative cultural resource for its community and the Long Island region by collaborating with neighboring organizations and fostering educational opportunities. 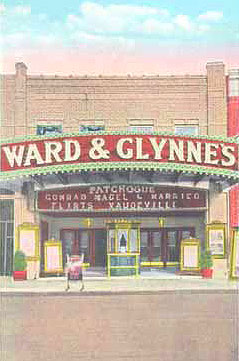 For 100 years, the Village of Patchogue has had a stage at the center of its community - the historic Patchogue Theatre venue that originally opened as Ward & Glynne’s Theater in 1923. In its day, Patchogue Theatre attracted first-run feature films, Broadway productions, silent films, the very best in burlesque, vaudeville and live music performances with acts such as Bette Davis, Eddie Foy and the Fabulous Foys, The Paul Whiteman Orchestra, The Marx Brothers, John Philip Sousa and Rose's Royal Midgets, to name a few. During Patchogue Theatre's early years, the price of admission only cost 40 cents for adults and half that price for children. Glynne operated the Theatre until the Great Depression, when it was purchased by Prudential Playhouses, Inc. Not long after, the days of vaudeville had come to a close, but an evolving film industry and updated sound equipment helped maintain the Theatre as a major venue for first-run films on Long Island, while also serving as a community center for bingo, sing-alongs and other activities.

After a fire hit the Theatre Lobby in 1958, the Theatre was redecorated and designed in a simple and austere manner, with much of the ornate decor simply covered up by plywood, drywall and wallpaper. Patchogue Theatre continued to operate solely as a movie house, and in 1982, the ground floor was divided into two theater screens with the addition of a ceiling to extend the balcony level for a third screen. Essentially, this turned the Theatre into a "triplex," which it continued to operate as until 1987 when the building was closed. The combination of both an economic recession and the opening of a 12 screen multiplex theater nearby no longer allowed Patchogue Theatre to be profitable as a movie house.

It stood empty for eight years, and an investigation of the building by village officials and business leaders in October 1994 found that much of the original decor had been preserved under the drywalls, wallpaper and plywood that was installed in the late 1950s.

In 1996, three local businessmen came up with the initial funds to purchase the Theatre while the Incorporated Village of Patchogue applied for grants to renovate and restore the venue to its former glory. The Theatre's interior was restored to its 1923 grandeur in several phases and Patchogue Theatre for the Performing Arts (PTPA) opened for business with its first performance in December of 1998.

Since 2004, Patchogue Theatre has maintained a state-of-the-art world-class sound system and Broadway caliber lighting & rigging. New, more spacious seating with better sightlines was installed by McHugh Institutional Furnishings in the winter of 2016. The new seats made their debut that spring at Patchogue Theatre’s first show back on April 2 featuring The Chapin Family.

There are now 854 orchestra seats and 252 balcony seats; bringing Patchogue Theatre's total number of seats to 1,106, including the handicap-accessible seating throughout the Orchestra level. This allows Patchogue Theatre for the Performing Arts to remain the Largest Theatre in Suffolk County.